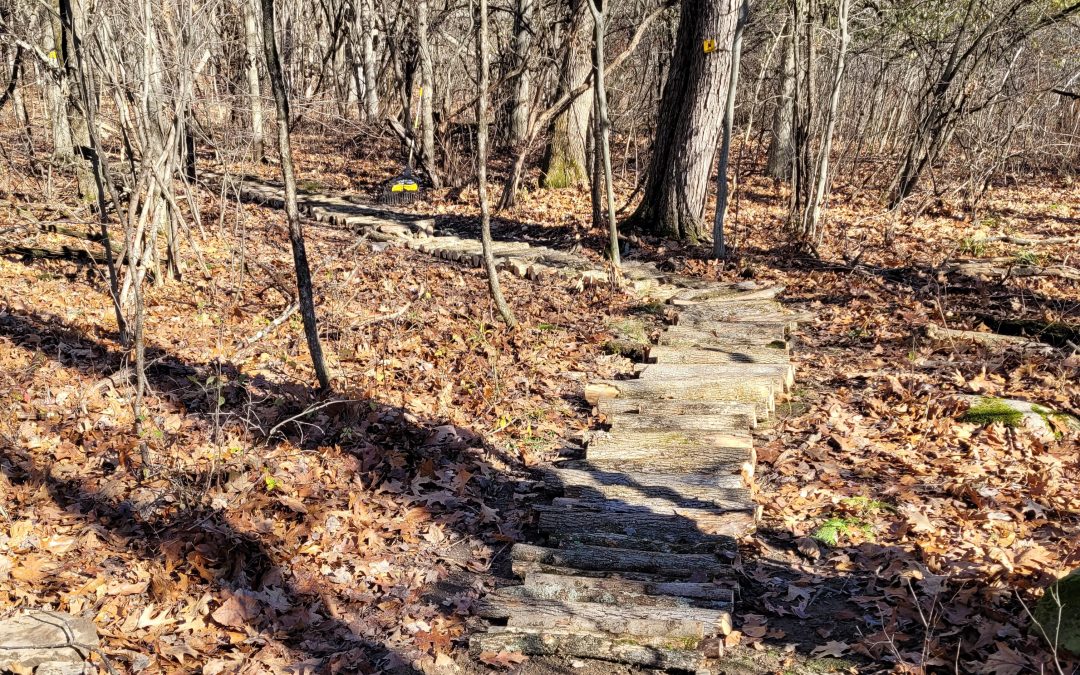 So, what does the invasive Emerald Ash Borer (EAB) have to do with trail work? At the Woodcock Preserve in Clifton Park, quite a bit. A little education on the invasive EAB, ways to improve trails in muddy locations, and the unfortunate demise of Ash trees gives the answer.

The EAB was first detected in the U.S. in 2002, but was expected to have been in the country since 1990. It’s an insect, from Asia, believed to have arrived on packing crates from a cargo ship. EAB eats almost exclusively on Ash trees and does not have many natural predators in the U.S. An adult female of this green and purple insect will lay 30-200 eggs inside the Ash bark. When these eggs hatch, the larvae live within the live section of the tree (phloem and cambium layers) and feed while leaving chewed paths inside the bark. As more EAB eggs hatch inside the bark of the Ash tree, the tree becomes stressed and it’s ability to carry water and nutrients to leaves for photosynthesis is lost. The tree then loses leaves, branches die-off and the tree eventually dies itself. A clear indicator that an Ash tree has been infested with EAB are numerous woodpecker holes and stripping of the bark as they tend to love eating larvae.

This Emerald Ash Borer has destroyed many Ash trees in the eastern U.S. and has spread to the Midwest. New York State has asked residents to not move firewood more than 50 miles from where it was cut to help prevent the spread of EAB and other invasive species. In Saratoga County, EAB is found in numerous places, meaning Saratoga PLAN Preserves are vulnerable.

What does all this have to do with trail construction?

Well, quite a bit actually. At PLAN’s Woodcock Preserve in Clifton Park, there are about 3 miles of trails with many stretches of muddy sections. Muddy sections like these can negatively impact sensitive vegetation on and around trails in a few different ways, including herd trails. Various bog bridges were installed in the past to address this, but many other sections of trails still need work. There are numerous ways to improve hiking trails in muddy locations including but not limited to; trail hardening, bog bridge construction, drainage and turnpiking, or corduroy construction. Trail hardening requires lots of small rocks or sand to “harden” soft muddy areas, both of which are rare at the Woodcock Preserve. Drainage was not possible due to the extremely flat terrain. Turnpiking requires lots of stone which is not only costly but can also introduce invasives, so that was ruled out as well. Bog bridges (low bridges over mud) would work, but is expensive due to the high cost of pressure treated lumber.

The solution came from a very old and simple technique of trail hardening known as “corduroy bridging” or simply corduroy. A corduroy trail is made by placing several small logs next to each other over wet/muddy sections of the trail. These logs are usually cut from trees approximately 4 to 5 inches in diameter and cut to approximately 2.5 feet in length. Each 2.5-foot section is then placed next to each other, which requires several trees. For example, to harden a 10-foot section of trail with trees that are 5 inches in diameter, 20 feet of tree is needed.

Since the EAB has been so prevalent in the Woodcock Preserve, there were many small Ash trees that had died in the 4-to-5-inch diameter range. When I first noticed this on the White trail at Woodcock, I counted about 40 dead or dying Ash trees that could be used to construct corduroy bridges, but there turned out to be many more.

Corduroy construction by the Saratoga PLAN trail crew volunteers improved 350 feet of trail was improved with bridging. Each of the four work events had 6 to 8 volunteers who worked for 3 or more hours each time in very muddy conditions. The total volunteer effort from our volunteer trail crews was about 105 hours. We cut dead trees with chainsaws and carefully placed the wood on the very muddy trails. No one left a work day without being very muddy! This volunteer effort saved PLAN $2,000-$3,000 in materials, if pressure treated lumber had been purchased for bog bridges. Since Ash tree wood has a hardness similar to Oak, these corduroys should stay intact for a decade or more before decaying.

It’s really hard to say thanks to the Emerald Ash Borer for supplying the resource to allow these trails to be more user friendly. One can only hope that there will be a remedy someday to control the invasive EAB and we will continue to have a sustainable supply of Ash trees in the future for making more baseball bats, furniture, flooring, tool handles, and other products.