Waterford to Whitehall Trail Gets $12 Million 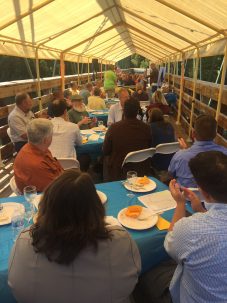 In January, 2017, Governor Cuomo announced creation of the Empire State Trail, which when completed in 2020 will be a 750-mile trail bicycle and walking pathway running from New York City through the Hudson and Champlain Valleys to Canada, and from Albany to Buffalo on the Erie Canalway Trail.  The Empire State Trail will be the longest state multi-use trail in the nation.  More information about the statewide trail is available in the 25-page Empire State Trail Plan which can be downloaded from the “Trails & Scenic Byways” section of the  Hudson River Valley Greenway website, or by using the following link.

Governor Cuomo’s initiative will dramatically extend existing sections of the Champlain Canalway Trail, which is a stone-dust bicycling and walking trail largely built on the towpath adjacent to both the historic and active canal.  Trail construction projects will be completed through a partnership involving the New York State Canal Corporation, the New York State Department of Transportation, and involved county and town agencies.  As depicted on the attached map, when completed in 2020, the Empire State Trail will encompass three major off-road trail sections totaling 22 miles in length:

In addition to construction of off-road trails, Empire State Trail funding will allow the NYS Department of Transportation and local governments to make strategic improvements to on-road sections, providing a safe, well-marked bicycle route from Waterford to Whitehall:

These improvements will directly connect to the larger 750-mile Empire State Trail: