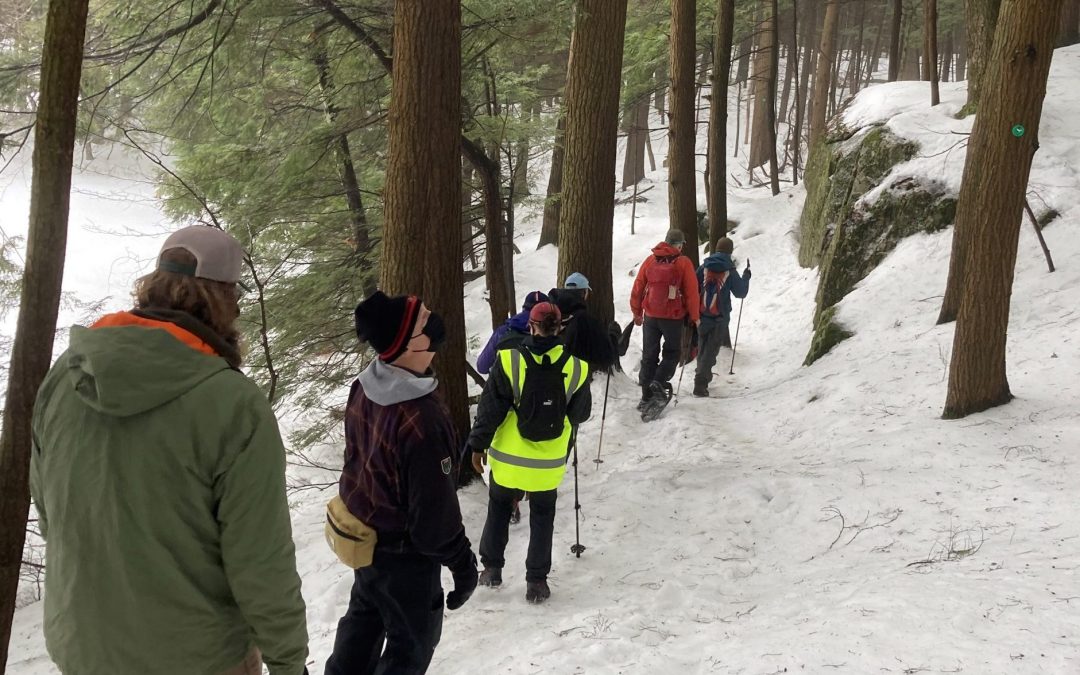 Volunteers recently mastered this dizzying skill as they searched among hemlock tree branches for a little bug that does a lot of damage: the hemlock woolly adelgid (HWA). This insect is an invasive species that feeds on North American hemlocks, slowly cutting off the tree’s nutrient flow to its own branches and needles.

Though HWA has been present in New York State since the mid 1900s, it wasn’t until 2017 that it was first discovered in nearby Warren County by Lake George and 2018 in Saratoga County. Andy Damon, stewardship specialist at NYS Office of Parks, Recreation and Historic Preservation (NYS OPRHP) explained that HWA was even more recently detected along the Hudson River, bordering Moreau Lake State Park.

“Because of the new infestation, we wanted to increase our survey efforts at Moreau Lake based on the large hemlock community in the area,” Damon said. Additionally, Damon pointed out that NYS OPRHP was concerned about the ecologically diverse Palmertown Range, which Moreau Lake is a part of, and how it could be impacted by an infestation.

Saratoga PLAN jumped at the opportunity to partner with OPRHP because the community’s health and well-being is corelated with the health of the landscape and Saratoga County’s forests are facing a new threat.

While all species of hemlock trees are susceptible to HWA attack, it is the Eastern hemlock, the most common hemlock in New York State, that gets hit the hardest; suffering acute or fatal damage. According to the NYS DEC, many hemlocks die within 4-10 years of being infested.

But the bug’s appetite affects more than just the tree.

Hemlock groves are sanctuaries for local wildlife. Their cool, shaded canopy provides essential habitat for numerous beloved species from salamanders to trout to moose. Frequently found on steep terrain, these coniferous trees stabilize soil and prevent erosion. Losing hemlocks in Saratoga County (and beyond) would threaten the survival of the very species that depend on it.

Ironically, the devilish insect has a rather adorable quality: in the winter months it dons a white, wool-like “coat” to protect itself from cold temperatures. This cotton ball-like appearance not only gives the woolly adelgid its name but is also the main mechanism used for its identification. A useful identifier, seeing as a single insect is about as big as three grains of table salt. Other signs of an infestation include grey-tinted needles or needle loss and branch die back.

In similar fashion to the insect at large, volunteers bundled up against the lingering winter elements and set off into the snow-laden hemlock groves in search of infestations. From February through April, eighteen volunteers covered approximately 8 miles of dense Hemlock terrain in Moreau Lake State Park, surveying over a thousand trees.

If you were holding your breath: no new infestations were detected in the scouted areas. Because HWA loses it wool in the warm months, identifying it year-round is a challenge. Surveys will likely begin again next winter.

Volunteers spent a total of 70 hours surveying the landscape. The time allowed for volunteers to befriend one another, acquire and practice HWA identification skills and more.

“Anytime you spend multiple hours on the trail with anyone you learn a lot about nature, and people, too,” commented Lorraine Skibo, a Saratoga PLAN board member and HWA volunteer.  “Andy Damon and Katie Jones, stewardship specialist and natural resource technician from OPRHP, were not only available to steward us through HWA detection and amelioration, but also answered a much broader spectrum of questions from us on flora, habitat and invasives in our region.”

The appreciation between volunteers and survey leaders was mutual. “We would not have had the ability to survey the amount of hemlocks without the help of  volunteers and Saratoga PLAN,” Damon said. “These efforts not only help to determine the presence of hemlock woolly adelgid at Moreau, but throughout the region. The information and survey techniques can be applied anywhere and go a long way in the protection in the hemlocks everywhere,” he said.

What you can do to help

According to the NYS DEC, one helpful thing you can do as a citizen scientist is leave infested branches where they are found as improper removal could contribute to further spread. Instead, if you can, take a photo of the infestation, signs of damage, and note the location. Then, fill out this form and email it to foresthealth@dec.ny.gov.