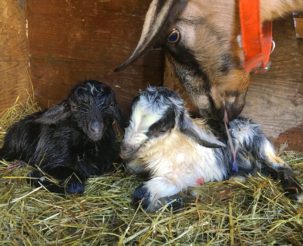 I went to the stall in the barn where the does are kept and there stood Shelby in the corner. She started to bleat at me. At first I felt excited, but then excitement rapidly progressed to a small panic. I had no towels or supplies with me in the event of an emergency. I was already in the stall; Shelby wasn’t planning on letting me leave until she was ready. About 20 minutes of Shelby pushing passed. This always feels like hours. Then she entered active labor. The excitement was back and I was ready to see what Shelby had spent the last five months making. She began to push and with a few small pushes and one final hard push, a small black buck entered the world. Shelby is a great mom and began cleaning him up. About five minutes later the pushing started again. The second one took less time and gave Shelby another buck, who was white and black.

Both bucks began nursing right away and I got Shelby some grain, hay, and water. Shelby spent much of her Sunday “talking” to her kids and nuzzling them so they would continue to get up and nurse. The first 24 hours is the first milk, called the colostrum. It is high in nutrients and is essential for kids to drink to ensure a healthy start to life. After the colostrum is gone, the mother is making milk to feed the kids for the next 8–12 weeks or until they are weaned.

After Shelby weans her kids, I will continue to milk her twice a day, every 12 hours, to keep her producing milk until the beginning of November. At that point she will be able to “dry up” and her body will rest to allow her to prepare for mid-November breeding and her five-month gestation. Then the dairy goat cycle will begin again.