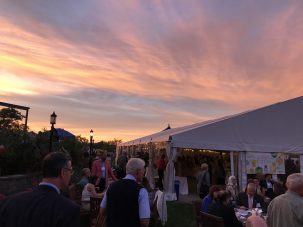 The delicious local food could all be washed down with area beverages ranging from Bowman Orchards Apple Cider and Hard Cider from Saratoga Apple, to beers from Artisinal Brew Works and Common Roots Brewing Company, to some of the harder stuff from Saratoga Courage Distillery and Upstate Distilling. There were wines from Fossil Stone and Victory View Vineyards.

Silent auction items filled the big tent, where guests could also watch a live painting demonstration by artist Elisa Sheehan. Many guests went home with prized items like a leather flight jacket, wine baskets, artwork, and experiences such as tour tickets on the Hoppy Trails Brew Bus. And everyone was entertained by the sounds of Hot Club of Saratoga.

Everyone had a great time–see for yourself in our Facebook album!