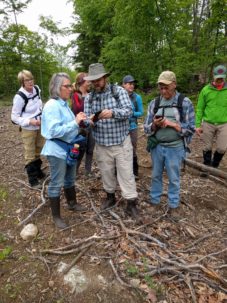 This dataset is available to local and county planners, conservation organizations, and even individual trail enthusiasts simply by downloading the data as a shapefile or KMZ from PLAN’s website or the NYS Geographic Clearinghouse, or by viewing the data on the county’s website.

Knowing the location, condition, and allowable uses on a given trail is imperative for recreation planning by everyone from the casual or serious user to local and countywide planners. Saratoga county is known for its trail diversity, including the urban Saratoga Greenbelt Trail, the historic Champlain Canalway trail, the nature trails of Moreau Lake State Park, and the more local loops offering enjoyable outdoor experiences in Saratoga PLAN’s Coldbrook and Ballston Creek Preserves. Eventually, as new trails are developed, such as at Corinth Reservoir Recreation area, Anchor Diamond Park, or around Lake Bonita in Moreau Lake State Park, they will be mapped and added to the countywide trails dataset.

Saratoga PLAN could not have completed this project without help from the New York State Department of Environmental Conservation, New York State Office of Parks, Recreation, & Historic Preservation, Saratoga County and municipalities, Skidmore College, The Nature Conservancy, Wilton Wildlife Preserve, and the many volunteers and friends of Saratoga PLAN.