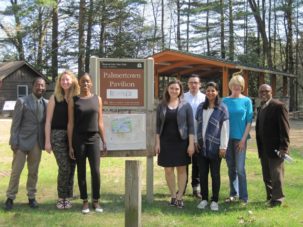 The students spent their spring semester gathering baseline and historic information, assessing the biophysical, economic and social characteristics of the landscape, and conceptually outlining the challenges and opportunities for the Palmertown area, community forests, and a trail system that would connect Moreau Lake State Park to Saratoga Spa State Park.

OSI, PLAN, and New York State are focusing attention on the Palmertown Conservation Area as a conservation priority. The area includes unfragmented forests which provide important wildlife habitat and timber, and protect the headwaters of the Snook Kill and Kayaderosseras Creek. A detailed landscape analysis by PLAN identified the landscape’s high potential for recharging groundwater reserves and its habitat resiliency for climate change, two important ecosystem functions.

The Palmertown Conservation Area is a 62-square mile landscape between Routes 9 and 9N encompassing portions of five towns in Saratoga County: Greenfield, Corinth, Wilton, Saratoga Springs and Moreau. The area also contains existing public lands and trail systems, which can be linked together to create a long distance trail network connecting communities and providing recreation opportunities that span the landscape.

“OSI is grateful for the work of the University at Albany students to involve the local community in developing a conservation plan for the Palmertown Conservation Area. The student’s active participation and engagement in conservation is exactly what we need to build the next generation of environmental stewards,” said Kim Elliman, OSI’s President and CEO. “Their analysis will provide the first insight into how we can create a recreational and ecological corridor to be enjoyed by residents and visitors while protecting wildlife.”

“The University at Albany planning students, under the guidance of international trail planner and professor Jeff Olson, did an impressive job of organizing themselves, researching the area, and professionally presenting their analysis and preliminary recommendations for the Palmertown area,” said Maria Trabka, Saratoga PLAN executive director. “Their work gives us the foundation to build upon for the planning effort with local residents and the Open Space Institute later this year.”

Saratoga PLAN is a nonprofit land trust that works to preserve the rural character, natural habitats and scenic beauty of Saratoga County so that these irreplaceable assets are accessible to all and survive for future generations. PLAN helps landowners conserve farmland, woodlands and natural habitats. PLAN connects people to nature through an extensive trail network, including 10 public nature preserves open for hiking, biking, cross country skiing, snowshoeing, and kayaking. Saratoga PLAN helps communities create plans that balance growth with conservation to sustain the Saratoga Region as a great place to live, work, visit, play and farm. PLAN facilitates community-based conservation by partnering with municipalities to help them accomplish their community’s conservation goals.