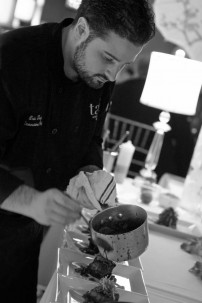 Chef Eric Tisaj began his career as a dishwasher and eventually worked his way up to becoming an award winning chef. After graduating from the Culinary Institute of America in 2007, Chef Tisaj accumulated a vast domain of experience working in many well-known and critically-acclaimed restaurants. In addition to his numerous accomplishments, Chef Tisaj became a Gold Medal recipient of the 2010 Annual Cornucopia and received the people’s choice award at the event.