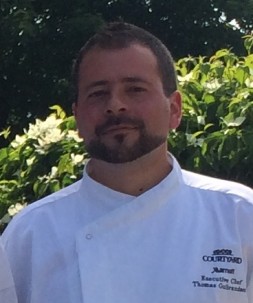 s Gulbrandsen has been in the culinary business for more than 20 years. In this time, he has had hands on culinary experiences in every kitchen position and type of establishment, including fine dining, country clubs, institutional establishments, hotels and banquet facilities. In 2005, he both attended a six-month internship in London at the famous Searcys Tower and also graduated on the Presidents List from the Schenectady County Community College Associates in Culinary Arts. He has won several cooking competitions, including the Schenectady County Community College Hot Foods Competition in 2004 and the Culinary Cornucopia Award in 2008, 2009, and 2013. Using his extensive prior experience and the skills he developed along the way, he now holds the position of Executive Chef at the Courtyard Saratoga.