The Saratoga Siege Trail is a partnership trail that PLAN created with the support of the organizations listed to the right. The trail is currently maintained by the Town of Saratoga Highway Department.

The trail is a flat, half-mile walking trail, which follows along the south side of Fish Creek, and connects Route 4 and Evans Street. 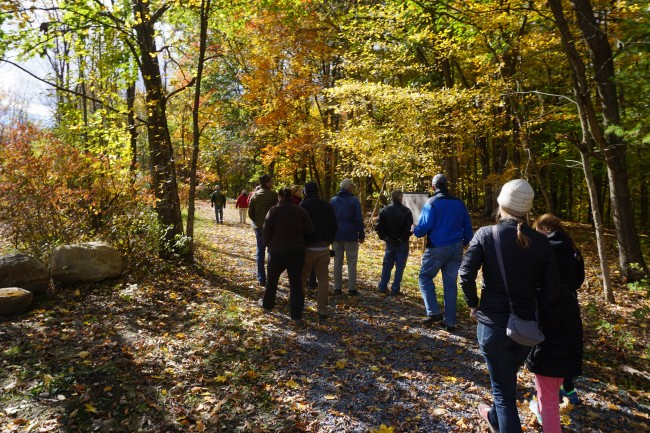 In addition to being a pleasant woods walk, the trail also possesses great historical significance. In fact, the area surrounding the Saratoga Siege Trail marks the location of a strategic American victory against the British Army during the Revolutionary War.

In the fall of 1777, American soldiers pursued British forces north and across Fish Creek, following a decisive victory at the Battles of Saratoga. It was here that the Continental soldiers surrounded the British,  destroyed their provisions, outnumbered them three to one, and left them no option for escape. Trapped by superior American forces, British general John Burgoyne surrendered his entire army on October 17, 1777. This battle is often attributed as being particularly influential in the acquisition of foreign aid, swaying the French to enter the war.

Support for the creation of this trail came in many forms from the Alfred Z. Solomon Charitable Trust, the American Battlefield Protection Program, the Bender Family Foundation, Brookfield Power, the Community Foundation for the Greater Capital Region, Greenman-Pederson, Inc., NYSOPRHP, Saratoga National Historical Park, Siena College, Saratoga County, the Town of Saratoga, the Village of Victory, and the RBC Foundation.

This trail is maintained by the Town of Saratoga Highway Department.