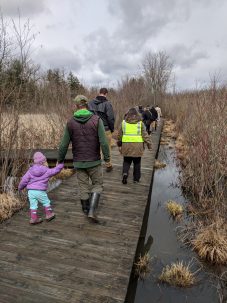 “When we first started the Open Space Project (later to become Saratoga PLAN) I don’t think any of us ever imagined we would be standing here today talking about 25 years ago,” said Jeff Olson. Olson was one of the first people to trek out onto frozen Bog Meadow in the winter in order to find the old raised train bed that today forms the trail route. “It’s an amazing thing,” he added.

Olson also noted that such a huge project could only have been accomplished with the hard work of many volunteers, and that going forward the partnership between Saratoga PLAN, the City of Saratoga Springs, and again, many volunteers, would make the trail better than ever.

“It’s a lot of work by a lot of people,” added Saratoga Springs Mayor Meg Kelly. “The trail system that we have planned for the community is something we are working really hard on.” Kelly introduced Tina Carton who described how the improved Bog Meadow Trail fits into the larger scope of the Saratoga Springs Greenbelt Trail.

The announcement was made from a raised boardwalk area that remains solid but is in need of leveling, strengthening, and repair after 25 years in the elements.

Greg Redling outlined the three main areas of focus for the project. One project involves a reroute of the southeastern portion of the trail that will make it easier to walk and take it off the shoulder of a busy road leading from the parking area. A second project will repair and improve the boardwalk and viewing area overlooking a beaver pond. A third project will improve the very rutted and rough northwestern portion of the trail extending from Lake Avenue/Route 29 to where a new trail section will be rebuilt.

Redling noted that grant funding for the projects has been applied for through the Land Trust Alliance, which administers the New York State Conservation Partnership Grant Program, and from the 3M Corporation. The City of Saratoga Springs has committeed $10,000 in matching funds. John Munter, of Munter Enterprises, was one of the engineers who worked on the trail 25 years ago, and he is back to manage the current projects. Redling noted that PLAN is actively recruiting volunteers to supply the manpower for much of the work.

PLAN Executive Director Maria Trabka said, “It’s now become clear that several of our trails, including this one, can now become part of an interconnected system in the county.” She talked about PLAN’s work with the Countywide Trails Committee, and also a partnership with the Open Space Institute to identify trail and conservation areas that will eventually connect Moreau Lake State Park to Saratoga Springs, via the Southern Palmertown region.

Participants took an informative mud walk up the Bog Meadow Trail, which in some places is quite wet and rough. Redling noted places where the projects will raise the trail above water and make it much smoother. Currently, hikers must hop from old railroad tie to railroad tie in order to stay out of the mud.