Rick Burke, owner of Irish Hill Century Farm, a thoroughbred breeding and boarding operation, grew up in the woods he has now permanently conserved. He recalls hunting, chopping wood, and exploring stone foundations, said to be remnants of 13 Irish families that settled in the area to seek respite from the Great Famine of Ireland in the mid 1800s. 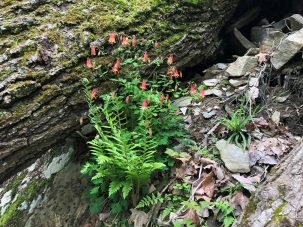 The property, blanketed by red oaks and maple groves, stirs Burke’s memories of woodsy wanderings and woodchips. “We were always cutting wood,” he said, explaining that his father used wood to heat the house. “It’s how we spent every weekend and holiday and summer time. There was no vacation from school. We just cut wood.”

Almost 13 years ago, when Burke learned that Finch, Pruyn & Company sold the neighboring woodlands to The Nature Conservancy, Burke knew he wanted to ensure that the land that had provided for him and his family would remain forested for generations to come.

“There’s a lot of housing pressure,” he said. “Farms that my father, uncle and grandfather had rented, they’re all gone now.” Burke explained that he wouldn’t want to see a similar phenomenon happen to the woodlands on his property.

By putting pen to paper on this lucky Friday the 13th, Burke purchased land from The Nature Conservancy and simultaneously conserved the land, in addition to some of his own acreage, and fulfilled a long-time vision. “I didn’t realize it’s been 12 years, going on almost 13. The 13 number keeps coming around,” he pointed out, chuckling.

“We’re thankful to be able to help Rick and The Nature Conservancy fulfill their vision of forever conserving this land for its habitat and scenic beauty,” said Mike Horn, PLAN’s Conservation Director.

Saratoga PLAN is a nonprofit land trust that preserves the rural character, natural habitats and scenic beauty of Saratoga County so that these irreplaceable assets are accessible to all and survive for future generations. PLAN has helped conserve over 7,000 acres of land. PLAN helps landowners conserve farmland, woodlands and natural habitats, and connects people to nature through an extensive trail network, including 10 public nature preserves open for hiking, biking, cross-country skiing, snowshoeing, and kayaking. Saratoga PLAN helps communities create plans that balance growth with conservation to sustain the Saratoga Region as a great place to live, work, visit, play and farm. PLAN facilitates community-based conservation by partnering with municipalities to help them accomplish their community’s conservation goals.